The natural development of a penis and its foreskin 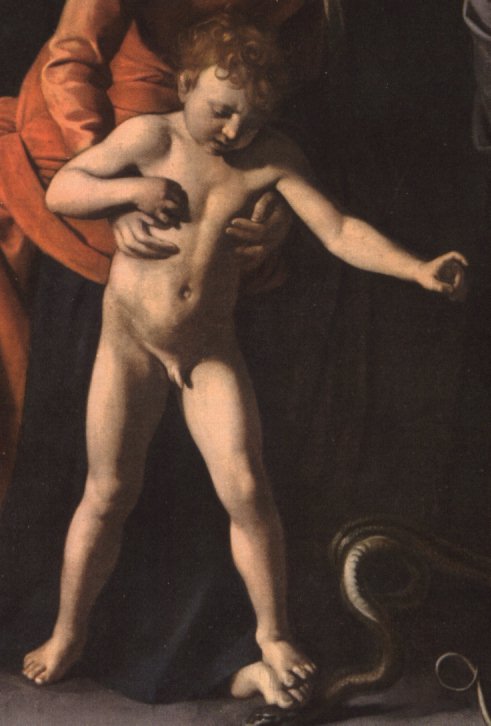 Detail from Madonna and Child with St. Anne, by Caravaggio

A young boy often (but not always) has so much loose skin that it covers the glans completely and wrinkles up into a bunch up in front of it. This is the typical 'rosebud' foreskin immortalised in art from ancient Greece through Renaissance times up until the present day. You will see it in many paintings of the infant Jesus (often with the young Saint John) even though in real life both were, of course, circumcised.

Detail of Amor Victorious, by Caravaggio

Some boys have even more skin to spare, so that it actually hangs drooping down in front of the penis. Others, though, only have just enough skin to cover the knob and a few, from their earliest years, have so little skin that part or most of the knob is uncovered. This is the normal range of variation and there is nothing out of the ordinary about any of these types.

A long, pendulous foreskin will 'flip up' when a boy urinates, and for this reason is often jokingly called a 'fire-hose'. This is normal and nothing to worry about, though it will not improve his aim. (Most small boys' aim is erratic at the best of times, anyway.) However if a foreskin becomes distended - 'balloons out' - when a boy urinates this is a serious cause for concern since it shows that the opening of the foreskin is too small to be adequate for the passage of urine. This may be congenital - in which case the baby will probably scream or cry when he urinates - but it may also be acquired in boyhood as a consequence of infections in or under the foreskin. In either case treatment, preferably by circumcision, is urgently required to avoid kidney damage. Dilation (stretching) of the orifice may be sufficient treatment but recurrence of the problem remains a significant possibility in this case, and even if the passage of urine is eased there remains a high likelihood of long-term problems with retraction of the foreskin.

Detail of Isaac from The Sacrifice of Abraham, by Andrea del Sarto

The foreskin is commonly not retractable in a baby, and often not in a young boy either. This is part of the normal development of the penis. The constriction at the tip of the foreskin may be too tight to pass over the glans, and also the inner layer of the foreskin may be attached to the glans (it gradually separates during development in the womb, but this may not be complete at birth). As with foreskin length, there is a wide range of variation.

In 1949 British pediatrician called Douglas Gairdner investigated when foreskins naturally become retractable. He looked at 100 newborn boys, 200 more under the age of 5, and a further 200 aged between 5 and 13. In the newborns, only 4% had a retractable foreskin but, as the graph shows, the proportion rose rapidly with age till by age 5 most were retractable. Among older boys (aged 5 to 13) 20% still had non-retractable foreskins.

When does a foreskin become retractable?
(Redrawn from Gairdner, 1949)

Our survey, parents were asked if they were worried about their boys' foreskins being too long or too tight. A third of the parents of school-age children who had not been circumcised answered yes, so this remains a common concern.

A boy's foreskin should be retractable at age 5, but between 10 and 20% will not be. If it is still not retractable by age 8 it needs medical attention. Sometimes a doctor will feel that it shows signs of loosening up and will advocate waiting a bit longer, but no boy should ever have to suffer a non-retractable foreskin later than age 10. Sadly, even half a century after Gairdner's study, many boys still do.

So what should a parent do? From a baby's first baths, the parent should gently, without force, retract the boy's foreskin as far as it will go and clean the glans with water only. Once the child is old enough to bath himself, he should be taught to do the same, at every bathtime. By age 5 he should be able to retract it fully and wash the complete glans. If he cannot, see if it shows signs of improvement over time - if it doesn't, seek medical advice.

When a teenager reaches puberty the penis grows dramatically. The shaft enlarges more than the skin, so there is less surplus and the foreskin automatically becomes shorter. Few boys will have any substantial free skin in front of the knob, but many will still be completely covered when soft. Quite a few will have the part of the glans poking out, and some will find that their glans is now completely exposed. On erection the glans will normally be uncovered - even if it doesn't uncover automatically the tension on the skin will mean that most boys find it more comfortable to pull it back. A few boys will find that the skin remains comfortably over the glans whether flaccid or erect, and provided that retraction is not difficult this is also perfectly normal.

At this age a boy should always retract his skin at the urinal, as of course should adult natural men. In a young boy the foreskin fits snugly over the glans and urine will not penetrate beneath the foreskin, so this is not necessary. After puberty the skin is loose and must be kept clear of residual urine or unpleasant smells and infections will result.

A boy whose foreskin is not retractable at this age is facing a serious problem which will not resolve itself without intervention. Getting tight skin over an adult size knob is not nearly so simple as pulling it past a child-size one. It also involves a serious risk of paraphimosis - a condition in which a tight foreskin remains stuck behind the glans, creating a painful and dangerous constriction. Circumcision at this age is more trouble (and much more expensive) than before 10. Nevertheless, it is still a minor operation compared to most other surgery, and in most cases it will be necessary. For the sake of the boy's self-confidence it is best carried out as soon as the problem is discovered. A caring parent should always have ensured that a boy's foreskin is freely retractable before age 10, so that this situation should not arise.

A small boy's forekin is much longer in relation to the penis than an adult one. At birth it may not be retractable, but it should become so in the toddler years. In the teen years it will appear to become shorter as the penis grows to adult size.